The Treasure of the altar: the ineffable majesty of Holy Communion 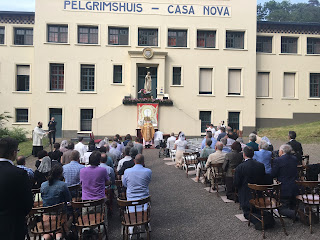 1.      Holy Communion is the treasure of the altar
The Council of Trent teaches us: "Our Lord Jesus Christ, proclaiming himself a priest for ever according to the order of Melchizedek (cf. Ps 109: 4; Heb. 5:6), offered to God the Father his body and his blood under the species of bread and wine and under the same symbols gave to the apostles  to take. ...He celebrated, in fact, the old Pasch ...[and] instituted the new Passover, namely himself, that has to be offered by the Church through his priests under visible signs. ...And St. Paul says (1 Cor 10:21) that those who are contaminated by participating in the table of demons cannot attend the Lord's table, table meaning in both cases the altar" (Sess. XXII, chap. 1).

For St. Augustine the expressions "altar of God" and "table of God" are synonymous (cf. Serm. 310, 2). In a sermon the saintly Bishop of Hippo, explaining the martyrdom of St. Cyprian, emphasized that the liturgical table was the place where the sacrifice is offered to God: "You who know Carthage know that in the same place of the martyrdom of St. Cyprian a table was erected to God, which is called then the table of St. Cyprian, not because Cyprian would eat there, but because he was slain there. So with his own sacrifice he prepared this table, not because he eats there or gives us to eat, but because there we offer the sacrifice [Eucharistic] to God, to Whom St. Cyprian offered himself in sacrifice" (Serm. 310, 2, 2). Christ has redeemed the world not with the celebration of the Last Supper, but with the offering of His bloody sacrifice on the Cross. Otherwise he could ascend to heaven after the celebration of the Last Supper.  Ephrem said that the table of the Last Supper was already an altar for Christ (cf. Serm. de hebd. sancta, 2, 8).  In Hymns of the Crucifixion, "the harp of the Holy Spirit," as he was called by Pope Benedict XV, spoke thus: "Ipse [Christus] altare et agnus, victima et sacrificator, sacerdos et esca" (3, 2). ["[Christ] Himself is the altar and the lamb, the victim and the sacrificer, the priest and the food."]
During the golden age of the Church Fathers we find the expression "sacrament of the altar" as a designation for Holy Communion, especially in the writings of St. Augustine (cf. Serm. 59, 3, 6). To emphasize the truth that Holy Communion is the fruit of the true sacrifice that takes place on the altar, St. Augustine said in one of his sermons: "Nos de cruce Domini pascimur, quia corpus Ipsius manducamus" (Serm. 9, 10, 14): "We are fed from the cross of the Lord, for we eat His body." Inviting neophytes to approach the altar with fear and trembling to receive Holy Communion, the saintly Bishop of Hippo recalled that they receive the sacred food from the Cross: "Hoc agnoscite in pane, quod pependit in cruce; hoc in calice, quod manavit ex latere" (Sancti Augustini sermones post Maurinos reperti: Miscellanea Augostiniana I, 19): "Acknowledge in the bread what hung on the Cross, and in the chalice what dripped from his side."  St. Basil of Cesarea designated the distribution of Holy Communion with the expression "to give the sacrifice" and to receive Holy Communion as "receive the sacrifice" (cf. Ep. 93).
Receiving Holy Communion is at once a confession of the truth of the sacrifice of the Cross. So taught the Council of Trent: "Our Lord ... leaving a memory of His wonders (Ps 110:4) commanded us, when we receive Him, to honor His memory and to proclaim His death until He comes" (Sess. XIII, Sec. 2).
It is the mystery of transubstantiation that makes possible the union with the sacrifice of Christ, not only by means of faith and love but also through the consummation of the victim present under the sacramental signs (cf. Journet, Ch., Le Mystère de l'eucharistie, Paris 1981, p. 57). At the moment of Holy Communion the radiance of the bloody Cross is among us, though wrapped in the sweetness of the liturgical rite (cf., ibid.). Cardinal Journet admirably sums up this truth, saying: "All the drama of the Cross and bloody redemption of the world are transmitted in the ineffable silence, in sweetness, in the peace of the non-bloody sacrifice" (ibid., p. 71).
In his meditations on the Gospel, Bossuet described in these words of high mysticism the intimate connection between the sacrifice of the Cross and Holy Communion: "So you are my victim, my Savior! But if I were to limit myself to contemplate your altar and your Cross, I would not be quite convinced that it is to me, it is for me that you will offer yourself. But now that I eat, I know, I sense, so to speak, that it is to me that you offer yourself ... If you have offered yourself to me, then, it is a sign that you love me, because who gives his life for anyone if not for his own friends? I eat in union with your sacrifice; consequently, with your love: I enjoy your love entirely, for all its vastness; I perceive it as it is: I am penetrated. You come to put this fire in the bowels, that I love you with a love like yours. Ah!  I see now and know that you have taken this human flesh for me; that you have endured infirmities for me; that you have made the offering for me; it is mine. I just have to take it, eat it, own it, unite myself to it. You were made incarnate in ​​the womb of the Blessed Virgin, but you have not taken a single flesh: now you take the flesh of us all, mine in particular: you take it to yourself, it is yours: you make it like your own with your contact, with your action: first of all pure, holy, undefiled; afterwards, immortal, glorious: I will receive the character of your resurrection, provided I have the courage to receive that of your death" (Meditazioni sul Vangelo. La Cena, 23, cited in: Esposizione del dogma cattolico. Conferenze. Vol. XII. Eucaristia, Turin-Rome 1950, 176, n. 10).


Faith in the treasure of the altar and in the ineffable majesty of the Eucharist must not remain only in the realm of theory, but be reflected and incarnated in appropriate and unambiguous gestures and elements of liturgical architecture. The following liturgical prayer from the Coptic Rite can strengthen us in this truth: "Amen. Amen. Amen.  I believe, I believe, I believe. Until the last breath of my life I will confess that this is the life-giving Body of Your only Son, our Lord and our God, our Jesus Christ. He took this body from our Lady and our Queen, the most pure Mother of God.  He has joined it to his divinity.  I believe that his divinity never, not even for a moment, was separated from his humanity.  He has been given for the remission of sins, life and eternal salvation! I believe, I believe, I believe that it is all so!" (Quoted in: Journet, Le mystère de l’Eucharistie, op.cit., 54).
at 07:14